St. Augustine Lodge is one of 38 Lodges, which meet in Freemasons’ Hall, Park Street, Bristol BS1 5NH in the centre of Bristol, on designated evenings.

Our January meeting no longer exists being that members may have overstretched or indulged themselves over the festive period.

St. Augustine Lodge meetings commence at 1830 promptly and typically end around 2015-2030. Members then gather in elegant dining rooms for dinner, often including Provincial guests and visitors from other Lodges. On special occasions non-Masonic guests also attend.

The business of the Masonic Lodge (as is the case for Lodges throughout the world) is to:

St. Augustine Lodge Masonic meetings take a ritualistic form and are designed to ensure that all members are reminded that one has a purpose in life. Masonic tools (e.g. squares, compasses and rulers) are utilised to illustrate the way one should live.

Click through to the St Augustine Lodge events calendar.

A myth surrounding Freemasonry is that only the wealthy can join. Whilst there is an annual subscription paid by each member, generally the amount is much less than one would pay to join a golf club or a gym.

The Warrant for St. Augustine Lodge No. 3108 was granted on 15 April 1905.  It was the result of a petition signed by 23 Brethren of the Beaufort Lodge No. 103 in the Province of Bristol seeking to establish the new Lodge.

The Lodge family tree (Chart 103 – This information is copyright, and reproduced by permission, of the United Grand Lodge of England. Compiled by W. Bro. J.G. Amos, The Earl Amherst Lodge No. 3230) can be viewed here: http://www.staugustinebristol.org.uk/wp-content/uploads/Family-tree-chart-103.jpg

St. Augustine Lodge was established as a musical lodge; the name chosen by the Founders due to the neighbourhood of Freemasons’ Hall being closely associated with St. Augustine.

An Augustinian Priory formerly stood on the site of Bristol Cathedral. The Cathedral (dedicated to the Holy Trinity in 1542), was until 1539 the Abbey Church of the Black Canons of St. Augustine. Further, St. Augustine of Canterbury is said to have preached on College Green prior to his conference with the Bishops of the early British Church in the late sixth century.

St. Augustine Lodge was Consecrated on 14 September 1905, when 238 brethren were in attendance.   The Ceremony was conducted by W.Bro. JR Bramble the Deputy Provincial Grand Master and W.Bro. J Mason Gutteridge who had been the Master of the Beaufort Lodge and who became the first Master of the new Lodge. 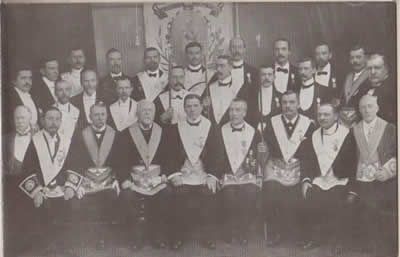 Above: The Founders and Officers presiding over the Consecration of St. Augustine Lodge on 14 September 1905.

The occasion was marked by the presentation of a Founders Jewel to each Founder Member. 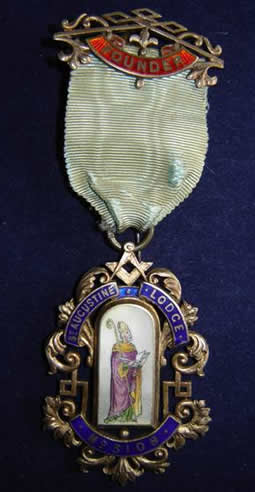 Above: The Founders Jewel featured was that presented to W.Bro. Stear in 1905.

St.Augustine Lodge – Roll of Past Masters

Regrettably, the St. Augustine Lodge records are incomplete. The two earliest minute books and consequent early history of the Lodge are missing.  So are numerous Lodge artefacts from those primary years.  It is believed that the minute books and artefacts were destroyed during the Blitz in 1940, which destroyed the former Masonic Hall in Park Street. The first record therefore dates from the 256th Regular Meeting, which was held on 11 January 1934.

The Lodge ‘Roll of Members’ is intact and complete.  The Lodge therefore has a complete record of its membership since Consecration.  These records were likely in the possession of the St. Augustine Lodge Secretary (and stored elsewhere) at the time of the Blitz, thus being saved from the wartime destruction.

At the Meeting held on 13t December 1945, the acting W.M. W.Bro. GT Ryan announced that to commemorate the 40th Birthday of St. Augustine Lodge, the 25th Anniversary of his Initiation into St. Augustine Lodge and his period of Office as Worshipful Master, W.Bro Ryan would present a Silver Trowel for use in one of our ceremonies. The trowel had originally been presented to his grandfather, a vicar in Bradford (Yorkshire), who had been the first Bishop of Mauritius (after laying the foundation stone for an orphanage in Bradford).  The engraved trowel is a treasured artefact and kept with the working tools of the Lodge. 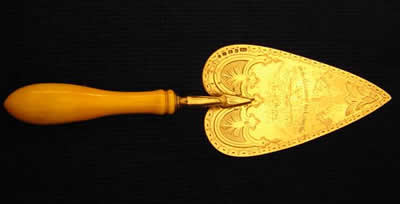 Above: W.Bro. Ryan’s trowel. The silver trowel is engraved as follows:

(front) Presented to The Right Reverend Bishop Ryan on the occasion of his laying the foundation stone of the Bradford orphanage July 5 1870.

On 13 May 1948, the Deputy Provincial Grand Master W.Bro. WW Jervis expressed his pleasure in handing to the W.M. the confirmation of the Lodge Charter Warrant, which had been issued by Grand Lodge to replace the original Warrant lost in the destruction of the Masonic Hall, Park Street, Bristol during the Blitz of 1940.

Subsequently, a Gavel wrought from timber salvaged from the ruins of St. Augustine Lodge Masonic building in Bristol, together with a level from the remains of an apron also recovered in the ruins were mounted on a base. This was suitably engraved and together with a copy of a book ‘Bristol Bombed’ was sent to the W.M. and Brethren of St. Augustine Lodge, Christchurch, New Zealand, as tokens of gratitude for the many gift parcels sent during the War years.

Like the other Lodges in the Province of Bristol, the St. Augustine Lodge played its part in assisting the efforts to rebuild the Masonic Hall in Park Street. At Regular meetings during 1954 the Brethren of the Lodge donated sums of money to provide further accommodation required by the Province of Bristol. The St. Augustine records indicate that that providing sufficient funds were available, the Park Street Masonic Hall would be rebuilt. Initially the sum of £150 13s 7d was contributed and subsequently sums of £200 and £149 6s 5d; substantial sums at that time.

The principal venue for regular meetings of St. Augustine Lodge has been the Masonic Hall, Park Street, Bristol since St. Augustine was consecrated in 1905. The practice was interrupted when the building was gutted by enemy bombing on the night of 24 November 1940. There then followed a succession of meeting places:

During the proceedings, the Provincial Grand Master presented to the WM the Centenary Warrant and a Centenary Jewel to each member of St. Augustine Lodge.

Above: The St. Augustine Centenary Jewel.

This website uses cookies to improve your experience while you navigate through the website. Out of these, the cookies that are categorized as necessary are stored on your browser as they are essential for the working of basic functionalities of the website. We also use third-party cookies that help us analyze and understand how you use this website. These cookies will be stored in your browser only with your consent. You also have the option to opt-out of these cookies. But opting out of some of these cookies may affect your browsing experience.
Necessary Always Enabled
Necessary cookies are absolutely essential for the website to function properly. This category only includes cookies that ensures basic functionalities and security features of the website. These cookies do not store any personal information.
Non-necessary
Any cookies that may not be particularly necessary for the website to function and is used specifically to collect user personal data via analytics, ads, other embedded contents are termed as non-necessary cookies. It is mandatory to procure user consent prior to running these cookies on your website.
SAVE & ACCEPT